Check out the before and after pictures of a Portsmouth neighborhood where coyotes were getting fed.

Portsmouth is one of our partner communities and the administration has been pro-active about coyote issues.  The town was one of the early adopters of our recommended No-feeding Ordinance and the Best Management Practices for Coexistence with Coyotes (CBMPs).  In addition the Portsmouth Police have been eager to work with NBCS, as we enter our new experimental phase, to troubleshoot coyote issues that some neighborhoods were experiencing.

By two months after it was GPS-collared, “Hanks” one of the coyotes being tracked by NBCS led us to two residential sites where data clearly indicated it was going to feed.   NBCS sent a report to the Police and, citing the Portsmouth No-Feeding Ordinance, Elizabeth Futoma, ACO, directed by Police Chief Thomas Lee, issued a warning to those at the northern feeding site.  NBCS staff, conducting weekly coyote-hotspot surveys, asked the owner of the southern site about possible reasons for coyote action there.  Since, there have been no coyote location points at either site or in the surrounding neighborhood.

Below are 2 screenshots of our tracking data before and after.  In the first picture, areas with clusters of GPS locations and travel vectors criss-crossing the neighborhood reveal the location of two suspected feeding sites.  Blue lines and points are taken at night, purple at twilight (dawn and dusk), red during the day. 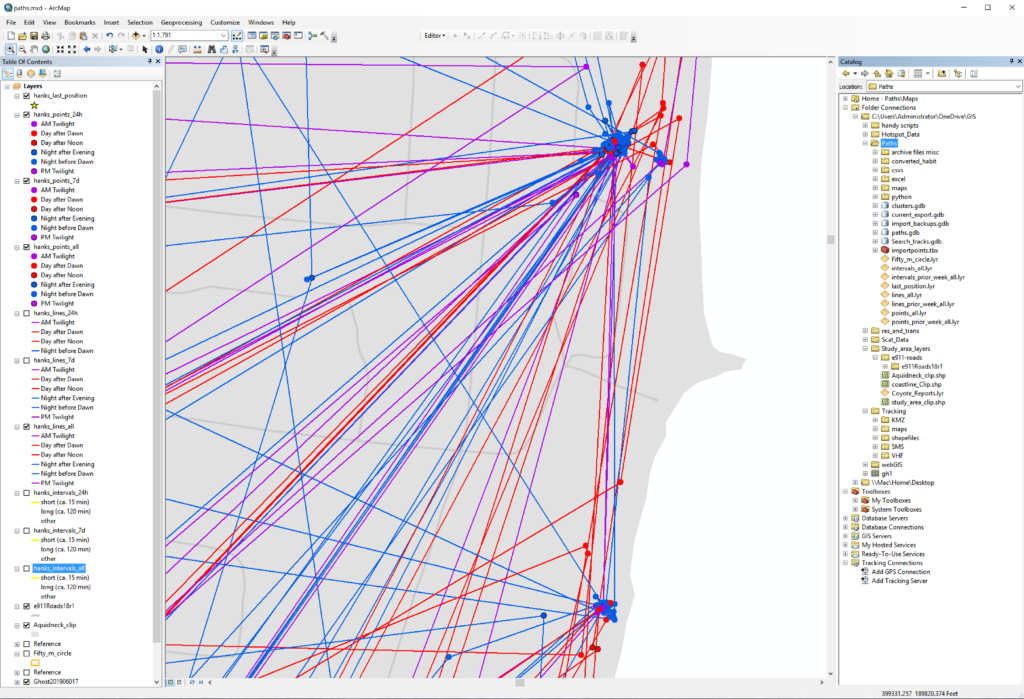 Before:  Two residential coyote-feeding sites in Portsmouth, RI, revealed by location points and travel vectors of a GPS-collared coyote.  Tracking period is from April 4 – May 17, 2019. (Photo: N. Mitchell, NBCS, The Conservation Agency)

The second screenshot is taken 3-4 weeks after the residences received visits from Portsmouth Police and NBCS.  The collared animal, and likely his pack members, quickly figured out there is no longer a food reward when going to either residence. Coyote traffic has dropped out across the whole neighborhood.  The risk of people or pets encountering a coyote has been reduced by removing the food subsidies. 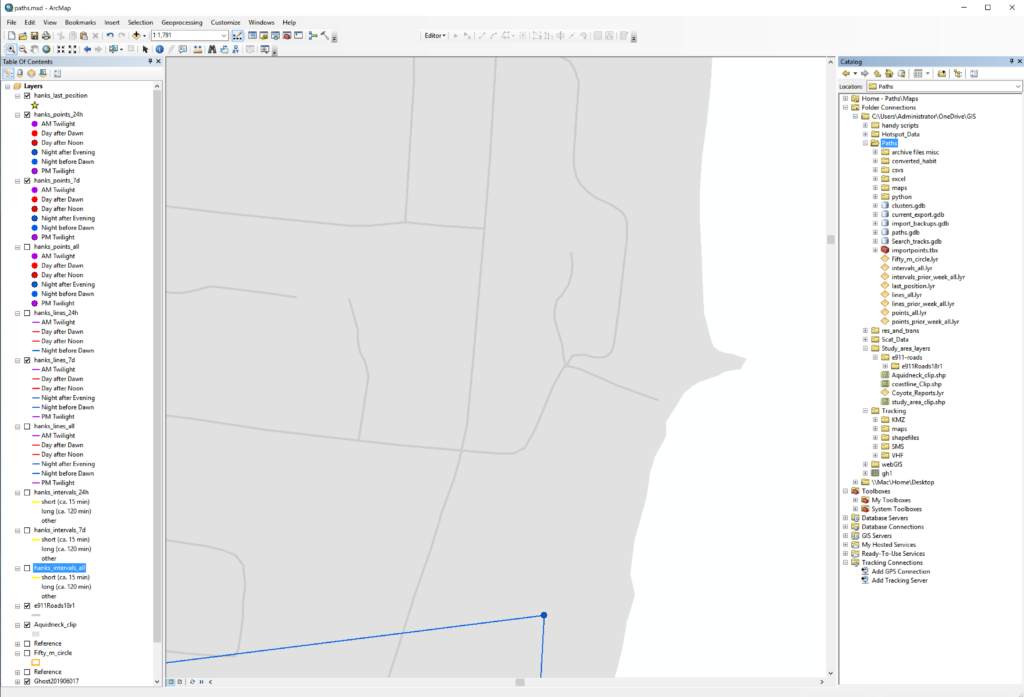 After:  The same neighborhood after coyote feeding is stopped.  Coyote travel drops out across entire neighborhood. Tracking period is from June 5 – 12, 2019, 3-4 weeks after warnings were issued. (Photo: N. Mitchell, NBCS, The Conservation Agency)

After many years of accumulating anecdotal evidence the Narragansett Bay Coyote Study is now, with federal funding and in partnership with DEM, conducting food subsidy removal experiments with cooperating communities.  It is our job to provide scientific data that show (if we prevail) that coyote populations and coyote behavior can be controlled by managing human food subsidies.  This was our first experiment with stopping residential feeding – and the results so far are pretty dramatic.

While NBCS can’t track everywhere, communities with coyote traffic like the Portsmouth neighborhood above can take the lead from our findings.  Residents can keep an eye out for subsidies:  food in compost, pet feeding outdoors, free range chickens, feral cat feeding, or even intentional coyote feeding.  You will know there are easy pickings being offered when coyotes start hanging around.  Putting out food attractants for coyotes is illegal under current RI regulations and DEM will issue fines to offenders.  It is recommended that towns, like Portsmouth did,  adopt municipal No-Feeding Ordinances so that food subsidies found can be shut down by local police, generally with an educational visit.  Sometimes a citation or town assistance with farm issues may be required.

Great teamwork Town of Portsmouth!  Go get ’em Liz!  And last, thank you retiring Chief Lee – you will be missed!

Posted On October 23, 2017
The NBCS report summarizes findings from NBCS research on Aquidneck and Conanicut Islands since 2005. It focuses on human food subsidies provided to coyotes revealed by…