Between November 1999 and November 2000 the Turks and Caicos Department of Natural Resources was attempting to rescue and relocate iguanas from a planned development on Big Ambergris Cay. Populations of the Turks and Caicos rock iguana (Cyclura c. carinata) once numbering in the millions had, by the year 2000, been reduced to an estimated 30,000 individuals. C.c. carinata, the smallest Caribbean iguana, had dissappeared from 13 islands in a period of only 20 years. 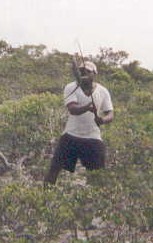 The dissappearence of iguanas was explained by biologist John Iverson (1978) who discovered that the iguanas could not withstand predation by the free-ranging cats and dogs that accompanied human colonists to the islands. The little iguanas had evolved in the absence of mamalian predators and were unwary vulnerable prey. Undeveloped Ambergris Cay (with no dogs or cats present) still supported an estimated 15,000 iguanas- about half of the remaining world population. Urgent conservation action was needed as prime iguana habitats there were about to be excavated for a marina and cleared for development.

After an inventory of available islands, Long Cay, Caicos Bank, part of the Admiral Cockburn Nature Reserve, stood among the best candidates for a relocation site. It was big (108 ha), and could ultimately support thousands of iguanas. Cyclura c. carinata had survived on Long Cay through at least 1977 (John Iverson, pers. com.), but had been since extirpated, presumably by cats abandoned there. The TCI goverment then initiated a successful program to remove remaining cats from the Nature Reserve in order that rescued iguanas from Ambergris could be moved to and survive on the island. 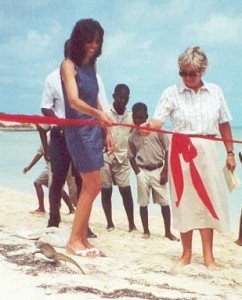 With Long Cay free of non-native preditors, 403 iguanas were captured on Ambergris and relocated to the Nature Reserve as part of the Big Ambergris Cay development mitigation effort.  The rescue and relocation effort was a cooperative project conducted by The Department of Environment and Coastal Resources staff, The Conservation Agency staff and volunteers, and staff at the Denver Zoo.  PIT (passive internal transponder) tags were implanted in the dorsal surface of the thighs or lumbar region of all founders so that they would remain identifiable, as long as tags remained in the animals, using Trovan-compatible readers. On a monitoring assessment in 2000 we documented the presence of hatchlings, and in 2001 the presence of hatchlings and 1-year olds.

In 2004 we mounted an expedition to conduct the first population density estimates on Long Cay since the restoration was complete.  We also wanted to check on the condition and growth of animals; the last monitoring assessment had been inNovember 2001.  We used cross-island transect sampling and mark and recapture events to evaluate the current numbers of iguanas on the cay.  After the density transects were complete we captured a sub-sample of animals that we weighed, measured, probed to determine sex, and PIT tagged (if they had not previously been captured).  We took a GPS position on the capture location of all animals.

Long Cay is 4.8 km long and contains 103 ha of land area.  Most of the island is narrow, less than 200 m across, but spans 700 m at the widest section at Sand Point.  To conduct the 2004 density assessment we walked 53 transects perpendicular to the long axis of the island.  The linear distance surveyed was 9405 m. These transects ranged from 15 – 660 m in length.  Along each transect, we recorded the perpendicular distance of each iguana from the centerline.  From 1 – 9 iguanas were seen per transect (Figure 1).  Iguana abundance was not uniform over all parts of the cay.  In general, we sighted more iguanas on transects with greater diversity of habitat (sandy regions, brushlands, and rocky hillsides) as opposed to those with only one or two types of habitat (Figure 1). 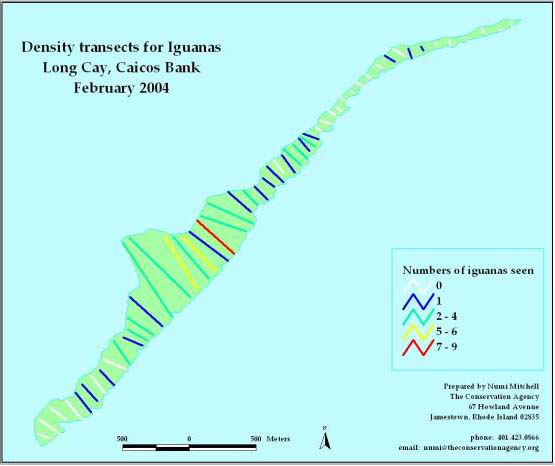 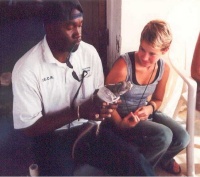 We used two methods to analyze the transect results:  1) The DISTANCE Program, using the Negative Exponential Key Model (no adjustments, or k(y) = Exp(-y/A(1))), and 2) simple extrapolation using all animals sighted within 1 m of the transect line (i.e., a 2 m strip transect).  The Distance model resulted in an estimate of 10.34 animals/ha (95% C.I. = 7.32 – 14.60 animals/ha) or 1,065 animals (95% C.I. = 754 – 1,504 animals) for the entire cay.  A naïve (no test of behavioral, temporal, or other biases, and assumed equal sightability to 1 m) extrapolation to determine abundance using strip transects gave a very similar estimate:  12.76 animals/ha or a population of 1,314 animals for the entire cay.  This is a thrilling result because it means the population on Long Cay has more than doubled in size since 2000.

We were able to crosscheck our results using a mark-and-recapture estimate.  As described below, we recaptured 22 animals for the monitoring effort.   Six of these were marked founders, the rest were born on the island and unmarked.  Using the Peterson-Lincoln Index to naively estimate population size using these capture data we got a surprisingly similar point estimate for the Long Cay population:  1,324  (95% C.I. = 805 – 3,3715 animals).

In addition to gathering data to evaluate current population density on Long Cay, we spent part of the field session recapturing individuals we previously relocated to the cay and capturing and tagging iguanas that hatched there over the past four years.  We captured 22 animals to assess their condition and, if previously tagged, evaluate their growth.  As mentioned above, only six of those captured were tagged founders.  Initially, after catching two 400 g untagged animals, we were concerned that the PIT tags had somehow fallen out.  However, several factors convinced us that we were actually catching untagged animals hatched on the cay:

The growth rate of the iguanas on Long Cay appears to be much faster than recorded elsewhere.  So far they seem to be doubling their weight each year.  This is vastly different from the growth rate Iverson (1979) observed in a Pine Cay population of C. carinata he studied in the 1970s.  For example, six of the animals we caught that were born on Long Cay had snout-vent lengths (SVL) greater than 20 cm (range 20 – 31 cm).  None of these could have been older than 3.5 years.  On Pine Cay in the 70s (at that time, densely populated with iguanas) Iverson reported an average SVL of 15 cm (the largest known 3.5-year old was 15.2 cm) for 3.5 year olds.  Iverson reported that iguanas on Pine Cay took 7 years to attain a SVL of 20 cm.

The relatively low population density (10-12/ha) on Long Cay probably causes the difference.  Three decades ago, Pine Cay iguanas occurred at densities of 50 per hectare (Iverson 1979).  When Glenn Gerber was conducting research on Big Ambergris in the 1990’s (Gerber 1998) he reported similar iguana densities there. 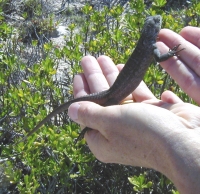 Some of our recent data from Big Ambergris has shown that populations achieving these densities are probably food limited (population growth is controlled primarily by food availability).  In the summer of 2000 there was an intense and localized drought on Big Ambergris.  The grass was brown and brittle and leaves had fallen from all but the succulent plant species.  It looked like a wasteland in June and July when we went to capture and relocate animals from the cay.  The iguanas were shriveled and weak.  We were able to approach and pick some up because they were too feeble to escape (we left these on the cay because we felt they would not survive a relocation).  Several corpses were found as we walked the bush. 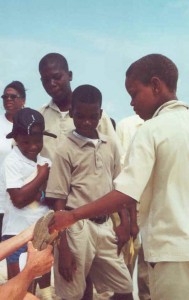 By October of that year the vegetation had recovered.  At this point we conducted a population estimate to see whether there had been any significant mortality due to the drought.  We had a good baseline for comparison.  In the 1990s Glenn Gerber conducted density studies using transect sampling that he analyzed using the DISTANCE program (Gerber 1998).  During that non-drought period he estimated that the total iguana population on Big Ambergris consisted of approximately 18,180 total individuals (95% C.I. = 12,518 – 27,727 animals).  We conducted a similar population estimate in October 2000, approximately replicating Gerber’s transects and methods using submeter real-time differential GPS toretrace his routes and DISTANCE for analyses.  It appears that the decrease in summer food on Big Ambergris caused mortality, not just temporary emaciation.  Though the drought ended by October, our survey revealed that the Big Ambergris population had declined to an estimated 10,261 individuals (95% C.I. = 6,794 – 15,612).

Based on Gerber (1998) and Iversons’ (1979) reports and our data, we predict the Long Cay population of iguanas will continue to grow until competition begins limiting it – then it should start to level out.  As the population approaches carrying capacity (which, if similar to other cays in the region, should be something near 50 animals per hectare or about 5000 animals) we should also see growth rates of individuals begin to slow down and resemble that observed by Iverson on Pine Cay.

Currently, we believe that the animals on Long Cay are not food-limited; individuals are growing faster because there is little competition.  In the subsample we captured, along with their relatively large size, Long Cay-born animals could also be distinguished from Big Ambergris Cay founders by the lack of injuries or scarring.  The recaptured founders, as is true of most animals captured on Big Ambergris, had scars and old wounds that we suspect occurred during intraspecific, agonistic encounters on Big Ambergris before they were relocated.  Again, because of Long Cay’s comparatively sparse population, the iguanas may be enjoying fewer conflicts and less battle scarring.  It may also be that the younger Long Cay-hatched individuals (all less than 3.5 years in age) are less apt to battle than are older individuals.  We also noted that the coloring of all individuals on Long Cay appeared bright.  We believe that this is because they shed frequently due to the rapid growth rate. 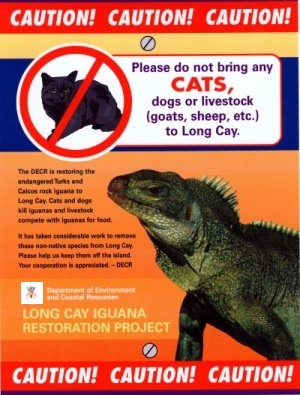 Preventing cat reinvasion:
Tomahawk live traps used in this study are excellent censusing tools for iguanas and will be critical equipment if any cats are released on Long Cay in the future.  We are thrilled to report that Long Cay still remains completely free of cats.

Significance of our work:

Until this recent field session, we had little information about current population levels for iguanas on Long Cay.  We can now report that the Long Cay Restoration Project is an unqualified success.

Based on the establishment and reproduction of the founders, the large number of sub-adults in four year classes observed, the condition of all animals, and the estimated large increase in population size (187-373 %), we believe that the Long Cay population of Cyclura carinata is already significant to conservation of the species as a whole.  We believe the long-term success of the population on the 103 ha island will relate to three principal factors generally present on large islands:  1) habitat diversity (shelter, basking, breeding sites), 2) food diversity (many species of plants and invertebrates), and 3) topographic diversity (higher elevation is important protection from storm impacts).

As always we thank our partners at the DECR. We are grateful to Norman Saunders, Beth Outten, and Telina Stiles, of South Caicos, John Frey, Peter Koch, and Virginia Brewer, of Pine Cay, and the Denver Zoological Foundation and Denver Zoo Staff, for help and support.