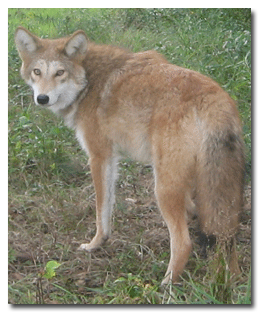 What is a coyote "pack?"

A coyote pack is a family group – or a reproductive group. Coyotes are social animals that often live in packs. They often hunt and rear pups cooperatively. The pack is dominated by two breeding animals: the alpha male and female. Other members of the pack can include one or more pups from a prior year, animals from other packs that have been accepted, and puppies from the current year. The alpha male and female are the dominant animals in the group and patrol the same territory. Others in the pack are subordinate to the alpha pair. Subordinate pack members often care for the young of the year. Others help hunt for food. 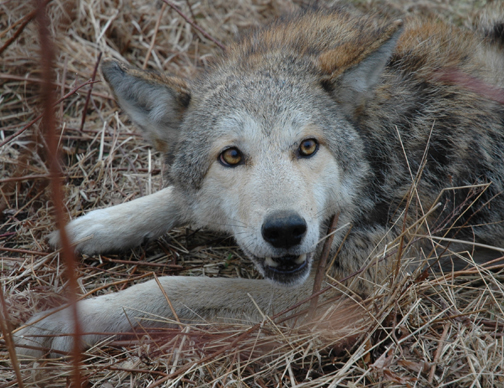 NBCS monitored an alpha pair – Bonnie (pictured left) and Clyde (pictured right)- from March 2010 through April 2011. We believe they had puppies both years in a den on Sachuest Point. Their territory was large and extended from Sachuest Point, Middletown, to north of Mill Road in Portsmouth. NBCS has found that Coyote packs have territories that are as large as needed to support the pack members.

What are "transient" coyotes? 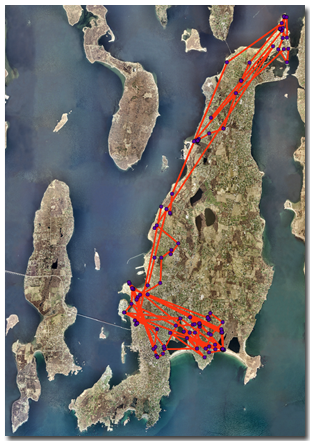 Transient coyotes are solitary, nomadic individuals that are not part of a pack or mated pair. They are generally made up of yearlings that have recently left their family pack, or they could be diseased, disabled, or elderly coyotes that were forced out of a pack. Transients can join another pack if accepted by the alpha pair.

Most transients are killed by cars crossing roads as they wander. Some individuals successfully wander for years.

NBCS study animal Milo was a 1- year old who made it to Natick, Massachusetts after traveling off Aquidneck Island. He first headed west to Coventry, then east to the Cape Cod Canal, up through Boston to Worcester, Massachusetts, then back to Natick where he was killed by a vehicle on busy Route 9 (check out Milo’s travels on Google Coyotes).

The map to the left shows hourly GPS points taken the first week of Milo’s capture that indicate his movement when he was starting to leave his pack in the Newport/Middletown area. His territorial behavior is indicated by the cluster of dots in southern Newport/Middletown. The traveling along the western coast indicates transient behavior.

Pilot was a comparatively successful transient. She was 2-3 years old and managed to make a living moving all over Aquidneck Island (check out her movements on Google Coyotes).

What are "resident" coyotes?

A resident coyote lives in and defends a territory with its other pack members. Resident coyotes keep other coyotes out.

What is a "territory?" 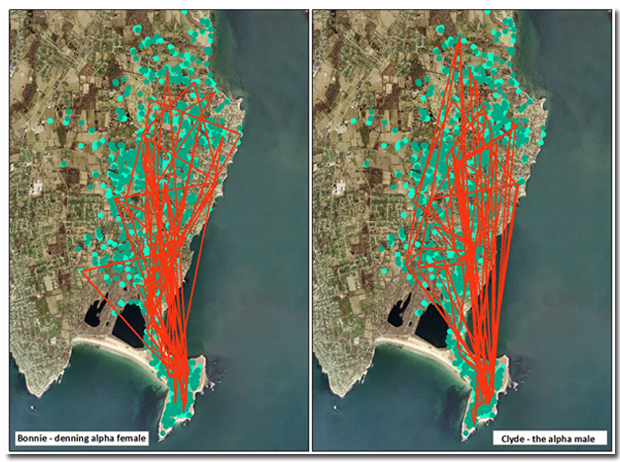 A territory is an area defended and exclusively used by a group, or pack of, resident coyotes. A territory’s size is determined by available food resources and will be as big as necessary to support the family group. A territory is different from a home range in that it brings out aggressive defensive behavior, whereas a home range is simply the area in which the coyotes live.

NBCS coyote packs have territories that are as large as needed to support the pack members. Even when caring for pups in a den several kilometers away, coyotes make sure to patrol all parts of their territory. This can be seen in the weekly movements (we connected the dots) of Bonnie and Clyde while caring for young puppies in early spring. They both patrolled the territory but frequently returned to the pups which were waiting in a den on Sachuest Point.

How many coyotes are on Aquidneck and Conanicut Islands?

This is the question NBCS gets asked most frequently and is, frustratingly, the most difficult to answer. To estimate the number of coyotes properly about 100 coyotes would need to be captured, marked, released and recaptured. Most coyotes are way too tricky to step into a trap twice. Because coyotes are so clever, this type of estimate is rarely if ever used for coyotes: it is labor intensive, cost prohibitive, and estimates are inaccurate.

NBCS instead works on determining the number of packs (family groups) and uses this as a index to population size. Based on our research we estimate there are between 10 and 14 resident packs on Aquidneck Island and 3-5 resident packs on Conanicut Island (Jamestown). Each pack will normally have 3-7 adults and 2-7 puppies. Community residents have reported up to 21 individuals in some packs and regularly report 7 puppies per pack in urban and suburban areas. The reason for the high numbers is that coyote numbers numbers fluctuate with food availability. In areas where they are receiving food resources number of packs, puppies, and individuals in each pack increase. If food sources are removed numbers of packs, pups, and individuals should all decrease. NBCS plans to initiate and monitor this effort.

We use GPS collars that transmit hourly point locations to estimate the territory size of each pack. We also use observation and motion activated camara traps to get as much information as we can about group size. Observations from islands residents have been very useful as well. People frequently get counts of puppies from April through June and report groups of adults as they observe them on the Coyote Info Line (401) 300- 4695.

A core area is the area in which a coyote spends most of its time. There should be a higher number of scent markings in this area (scat is a good indication of a core area). Within the core area are important resources for the coyote such as food, denning sites, sleeping spots, and water.

Why am I seeing coyote droppings in my neighborhood? 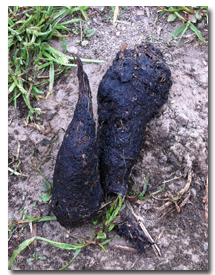 Coyotes use droppings, or “scat,” as a way of claiming an area: when other coyotes see or smell another coyote’s scat, they know that the area is already occupied. A pile of scat says “mine!” to other coyotes passing by.

Food is a major attractant for coyotes, so make sure that you and your neighbors are not leaving food out at night. An area with good food resources is not only an attractant, but it also can support more coyotes. In fact, coyotes often have larger litters of puppies in a neighborhood with food available than in a more natural environment. Keep coyotes out of neighborhoods by stopping food attractants.

What are the "Coyote Best Management Practices?"

The Best Management Practices for Coexistence with Coyotes on Aquidneck and Conanicut Islands (also known as the CBMPs) are regional guidelines – based on NBCS science – for municipalities that are dealing with, or trying to avoid, coyote problems.  All four towns in the study area (Jamestown, Portsmouth, Middletown, and Newport) have adopted them fully or in part.

Who are the NBCS coyotes? 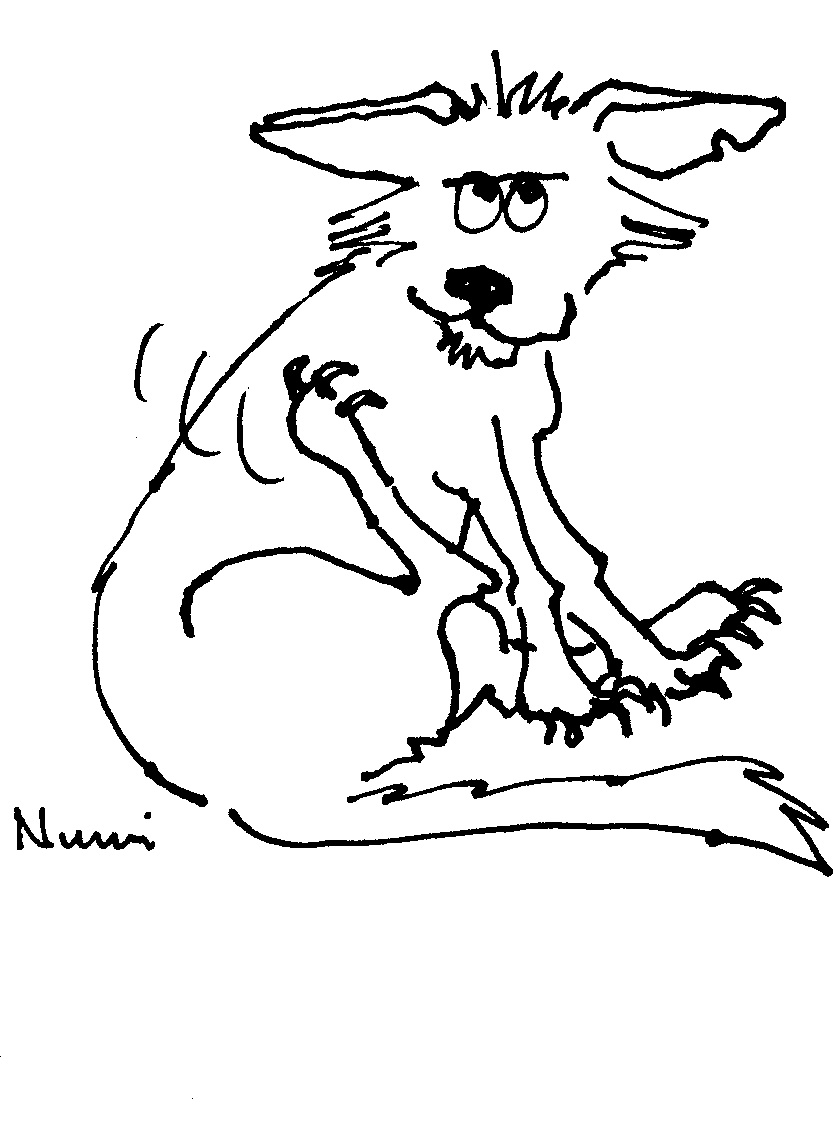 Who are the people behind NBCS?

Do we have "coywolves" in Rhode Island?

Short answer:  No, they are coyotes with some wolf genes.

Longer answer:  Our coyotes’ genome includes about 25% wolf genes picked up from hybridization with wolves as coyotes expanded their range through Canada.  Some offspring left Canada carrying wolf genes and continued their range expansion to the Northeastern US.  There are no longer wolves in New England and so the dispersers bred only with each other.  Some likely had more wolf genes and some few or none.  Over the decades the “piggy-backed” wolf genes have mixed through the entire population of coyotes.  The Eastern coyotes we know tend to be larger than western coyotes, probably as a result of these genes.

The term “coywolf” has been used for northeastern coyotes – but this seems misleading since they are not currently hybridizing with wolves. They are coyotes with some wolf genes.