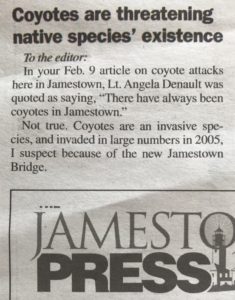 Interesting point of view from Stacey Lyon (Jamestown Press 2/16/17) – click link above – but are coyotes a singular threat to native species?  While most facts are correct, her letter includes several common misconceptions and provides an opportunity to address them below:  (Let me get on my soapbox.)

There. (I am climbing down.)